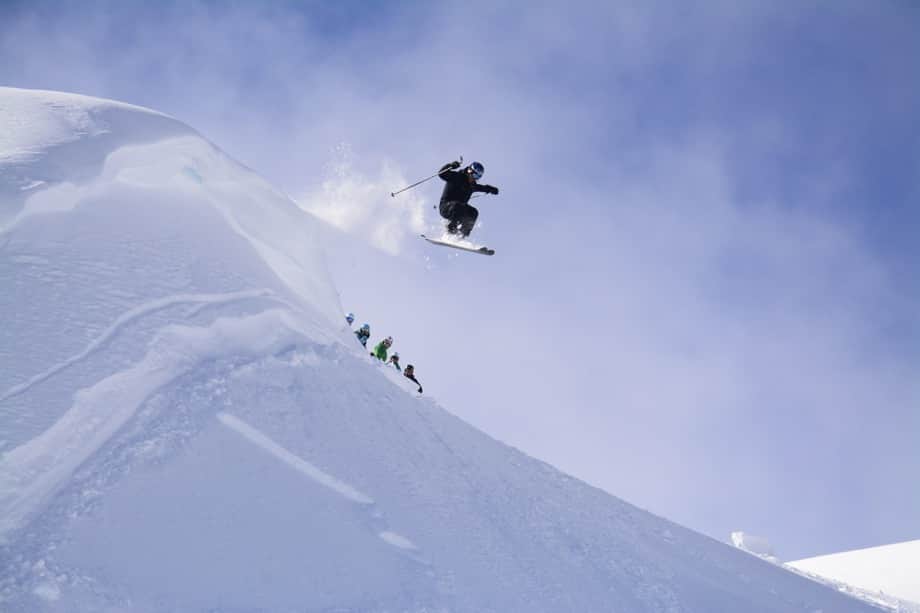 Is there any greater feeling than that of weightlessness? Ok, so we can’t fly. But we sure can drop cliffs. If you fancy saying goodbye to the grip of gravity for a few seconds, then why not throw yourself off a cliff – humans have done more dangerous things, right?

Despite the obvious and inherent risks associated with this adrenaline-seeking activity, let me tell you: the incredible sensation of free falling down to earth is seriously addictive.

You start with a small one, and then before you know it you’re finding yourself seeking ways to prolong the feeling for as long as possible. Bigger and bigger cliffs for more and more air time.

Pro skiers today are taking leaps in excess of 300ft (Fred Syversen’s world record stands at a staggering 351ft, or 107m). Let’s put that into perspective – that’s the equivalent of a 33-storey building, with a free fall lasting over 4 seconds.

Because when we have a pair of skis on our feet we feel fearless, indestructible. You only have to check out Jamie Pierre’s crazy drop in Wyoming – which was the world record until Fred unintentionally beat it in 2008 – to see that.

What Makes Dropping Cliffs in Whistler So Special?

So where does Whistler Blackcomb come into this? With over 1000cm (that’s right) of annual snowfall and a countless number of big mountain features to explore, over the years this place has established itself as a global centre for everything big mountain.

So I’ve narrowed it down to what I consider to be the top five most iconic free fall opportunities in Whistler. I have to admit, I may not have attempted them all quite yet. But much like a climber attempting to join the 7 Summits Club, I’m biding my time, waiting for the right day to clean up the list…

These cliffs are a great starting ground for would-be pro riders, as they offer a variety of plummet options ranging from novice (5-10ft or about 2-3m) to the main event: a solid 20ft (about 6m) face of granite.

What makes this band so iconic is the view from Peanut Gallery, aka Jersey Cream chairlift, as well as its unassuming entrance – directly beside the Rendezvous restaurant and merely meters from Blackcomb’s main intermediate groomed run.

When done properly, adventure-seeking skiers will casually veer from the mellow groomers, pass three or four clearly marked cliff signs and launch directly into the air space claimed by the Jersey Cream Bowl. Pro skier or not, for a few short moments this amphitheatre will belong to you.

This classic cliff is a bit of a Whistler enigma as it’s pretty tricky to locate. On top of that, once you do find it, the only souls able to bear witness to the event are those who happen to be looking out of the gondola window at they pass by Tower 27 at the precise moment you decide to go for it.

Another thing to be noted is the sheer proximity of the gondola itself – this cliff is merely metres from the moving cabins. They say standing at the top you get the feeling that you could easily sail right over the gondola with enough run up.

Thankfully it isn’t possible to come closer than five or ten meters of the commuting cabins – but this still might leave you feeling a bit of a jittery.

While I have not attempted this one myself, I have it on good authority that Alltracks’ star coach Nick Thomas has taken the plunge off Tower 27, and thankfully lived to tell the tale. If you join one of our courses next season, be sure to ask him about it during one of our epic Merlin’s après-ski sessions.

Despite scouring the internet, I was unable to unearth any good quality picture or video of this iconic whistler cliff, so if anyone has a shot of it, please post it in the comments below. This video shows a failed attempt just to give you a feel of just how close to the gondola you get:

In the meantime, check out Whistler Hardware for an awesome retro clip of a nameless skier attacking this monster. Judging by his attire, I’m guessing it’s sometime in the early ‘90s.

If the entrance to Café Cliffs is benign, then the lead-in to Lone Pine can only be described as malignant.

So, how do you get there? You have to head over to the Secret Bowl (which despite its name actually appears clearly on the trail map – not so subtle eh?) and take the high traverse across to the skiers left.

From here, a cliff-hugging sideslip (with considerable exposure to a nasty cliff band below) will lead to the lone pine itself and a small entrance into the curl. Once through the ‘gate’, a large but very steep granite shelf marks the launch zone of a sheer rock wall.

The beauty of this cliff is that it’s naturally tapered shape allows a few height options for your decent, so if it is your first time off the curl, you can choose to slide down to the 10-15ft (3-5 metre) zone.

But many hardcore skiers out there will do no such thing. Maybe you want to lay full claim to this iconic cliff, in which case after entering the curl itself you will need to hang immediately right and launch the full and very genuine 30ft (9 metre) option of Lone Pine. Good luck.

Perhaps in its own right the waterfall may not have ranked this high on my list, but when it is hit as part of a multi cliff sequence – including my number one pick below – then its place is firmly set.

The waterfall has many launch options, which is a very good thing (due to the relatively flat landing) as the bigger you go, the flatter it gets.

I would go so far as to say that this is the most popular cliff in the entire resort – most probably due to its high vis from Peak Chair, as well as very easy access for Shale Slope Ridge.

Just how popular are these cliffs? Well, let’s just say by lunchtime on a clear powder day, the waterfall landing has more craters than a full moon.

If you’re one of many thousands of people who’ve stood in the line on a big powder day waiting for the Whistler Peak Chair to open, chances are that you’ve borne witness to one of the most incredible live scenes in alpine skiing.

However impressive, this event will take time out of your powder morning waiting for the Peak Chair to open. When it finally does, you’re driven forward by a powerful surge of excited yet anxious people who begin to wedge themselves deep in to the lift queue (at a rate faster than the chair can handle).

The crowd jostles for position in the line-up and focus is drawn away from the mountain for a while. It’s only then that a murmur begins. People begin tapping their friends on the shoulder, and exclamations along the lines of ‘he’s going to send Jordan!’ can be heard in the air.

Once a critical mass is reached, people begin to realise that there is a skier standing atop Air Jordan, and needless to say, the entire crowd goes berserk.

Picture this: hundreds of eyes are now focused on one skier as he pokes his nose out of the rock garden and hits the first 15ft step down (no big deal right?) before he lands on a 20ft patch. There’s no time for thought collection though, as moments later he hits Air Jordan’s main event: a solid 60ft cliff.

While everyone loves a train wreck full respect is given by the crowd if a skier is able to stick a clean Air Jordan four-point landing and he is crowned the king of the morning.

Of course if you’re afraid you may not stick your ledge landing, you can always do what Julian Carr did in 2013, and clear the lot…

Which Drops Have You Done?

So there you have it. There’s no doubt that jumping off cliffs is, well, awesome. Nothing can come close to that rush, so if you haven’t already, give it a go. Tips? Try your best to stay composed whilst in the air, keep the speed up and be confident – confidence is key to dropping cliffs safely. Remember: you can never get hurt in the air!

Which of these have you done yourself when in Whistler? Or is there one I’ve missed you think is worthy of a mention? Let me know in the comments.